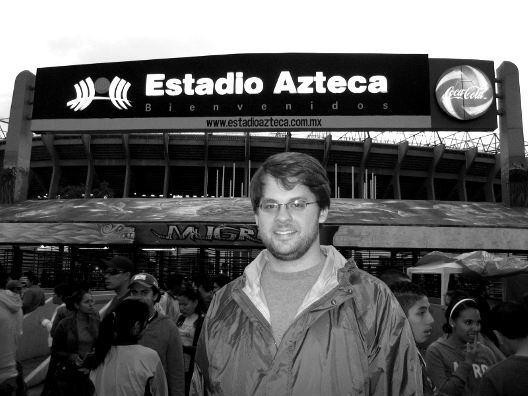 While watching the US’ blowout loss today versus Mexico in the Gold Cup final, my mind started wandering to the upcoming World Cup Qualifier between US and El Tri here in Mexico City’s Estadio Azteca on August 12th.  I ran across the ThisIsAmericanSoccer.com blog with a very informative post on travel tips for those coming to D.F. to watch the game.

I decided to put my two cents in, and wrote a long, rambling novel.  Not wanting to waste the effort, I’ll repost here:

Greetings from a US Expat in Mexico City — Very good post, here’s a few comments. (Ok, more than a few. I got on a roll.)

First and foremost: Estadio Azteca isn’t south of the city, it’s waaay south. The one time I went there via metro, it took a couple of hours from Polanco. I also went when the stadium was only about 40% capacity, and getting back out via light rail/metro was still an ordeal. While they try to have the light-rail trains lined up and ready to go, be prepared to wait a while to catch one, especially if you stay through the end of the game. (Although another match like today’s Gold Cup final, that may not be an issue.) Also, going out and back on the metro/train will be almost 100% soccer fans, most of whom are filled to the brim with $2 coronas.

A few other things to remember about Estadio Azteca: No belts, no bags and no fireworks allowed. (Yes, they actually say that). They have a bag check service outside the stadium for a few bucks, but leaving something valuable isn’t a good idea.

The Metro system is effective for getting around, but it does get very crowded at times. Especially around the center of the city. The front cabs are exclusive for women and children, and the waiting platforms for this part of the train are often patrolled by police. Ladies should definitely take advantage of it.

It’s rainy season here, so an hour or two of showers starting around 5 or 6 PM is the norm, but can sometimes start earlier. A light rainjacket is recommended.

As for the listed tourist visits, I’m for everything mentioned, except Xochimilco (pronounced So-she-Mil-co). It’s interesting, and if you have a lot of free days, I’d recommend it, but the place is really dirty, and way out of the way (Even farther south than the stadium). The Canals of Venice it is not. Better to spend your time at the other destinations.

The pyramids are really cool, but also a bit of a trip north. Check with your hotel for a tour service that takes you to the pyramids as well as stops by the Basilica (Where the famous Virgin of Guadalupe is housed). Tours usually run 30 or 40 bucks a head, but it will save you several hours, and you will see more in the meantime. The tour service at the Hotel Melia on Avenue Reforma is legit.

The National Anthropology Museum is very cool. The itinerary says to go there on Sunday, but keep in mind that on Sundays, public places such as museums, zoos, historical sites, etc., are free for nationals. Meaning: They’re packed.

The National History Museum isn’t exactly next door to the Anthropology museum, but it’s very close. Located on top of a hill in Chapultepec Castle (Castillo de Chapultepec), it has a nice view on clear days. Spring for the trolley ride that takes you up and down the hill, though, as it’s a bit of a hike.

Zona Rosa wouldn’t be my first choice to get a hotel room, but it’s fairly clean. Being the boy’s town for Mexico City, it has all kinds. Easily walkable, tourist friendly.

Lucha Libre is a fun time. Only buy tickets from the ticket window, as they are never sold out. No cameras allowed. They have a bag check, but again, why risk it? The neighborhood isn’t the best, so stick together when leaving. Keep in mind the metro closes around midnight.

Ok, amigos. That’s about enough from me! Enjoy your trip, please keep in mind that while here, like it or not, you are representing your country. All in all, Chilangos are good folks, but can get a little soccer crazy. So keep your head and remember that a smile and a handshake go a long way.

Check out the rest of their excellent US vs Mexico Estadio Azteca travel tips.