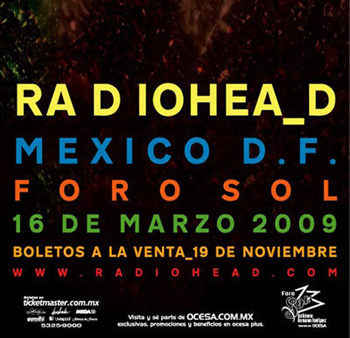 See Radiohead in Concert.  Check.  Finally had the opportunity to do so when the band landed in Mexico City to kick off what was billed as a Central/South America tour (Hey, aren’t we in North America?) back in March, 2009.

They played two dates here in Mexico City. On the day, the hour, the minute the tickets went on sale, I did the ticketmaster hokey-pokey to make sure I got some seats for Gretchen and myself before they sold out, which they did very soon.  They then opened up sales for a second concert which was to take place the day before our concert!  Drat. There goes opening night, so I had to convince myself it was better to see them after they get the kinks worked out on the opening night.  Right?

Both shows were performed in the Foro Sol, the first time for us to visit said location.  For Sol is a concert venue, wrapped in a minor league baseball park, inside an auto race track.  And is then placed in a crummier part of town, to boot.  I had heard stories, but seeing is believing.

To get in, one must first enter the race track through the grandstands, walk what seems like half way around on the track itself to enter the baseball park, and then walk halfway around the outside of the park to get in to more grand stands.  Getting out takes the same path, only there are about 45,000 other people with you.  Those racetracks aren’t as wide as they seem on television.

Aside from the venue, the concert was excellent.  I have listed the set list below, also taking the time to duplicate it in an iTunes playlist, using live versions of songs whenever possible.  Relive the magic, my man.  I don’t think we will be heading back to the Foro Sol any time soon. Maybe to see Radiohead again. Or the Beatles.

The best part of the show for me was the first encore. Very cool set in all.  Also, forgot to mention that Krafwerk opened.  They actually started 5 minutes early.  Those crazy Germans.