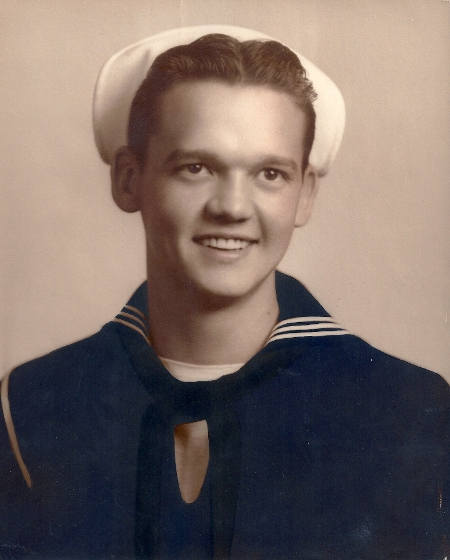 Carl Eb Crawford, retired rancher, lab technician, Navy gunner, bootlegger’s son, died on August 8, 2009.  Like his father before him, he had spent the day working outside, and came in to rest.

Born to Eb and Jura Crawford, Carl spent his young days roaming the creek valley with his rifle and his dog.  During the Despression and Prohibition years, Carl ocassionaly assisted his father in making quart deliveries to the oil company offices in downtown Tulsa.  At age 14, he began dating Louise Gregory, his eventual wife of 63 years.  Upon turning 18 in March, 1944, Carl promptly enlisted in the Navy, leaving Louise and his mother to receive his diploma during high school graduation later that spring.

While in the Navy, First Gunner Crawford served aboard the U.S.S. Shangri-La aircraft carrier, at the time one of the largest ships in the Navy, with a population larger than Carl’s hometown.  During his service, Carl saw all the Pacific ocean he cared to see, plus crossed the Equator, traveled through the Panama Canal, and observed at least 2 enemy planes as they made half-hearted efforts at air attacks near the last days of the war.

Upon discharge, Carl and wife Louise proceceded to raise 5 children while living and traveling through various parts of Oklahoma, Texas and Mexico. After retiring from DuPont labs in Tulsa, Carl began a second career of cattle ranching.  Later in life, Carl excelled in RV’ing with wife and family, cheating at cards, and telling tales so tall that only his grandsons would be gullible enough to believe them.