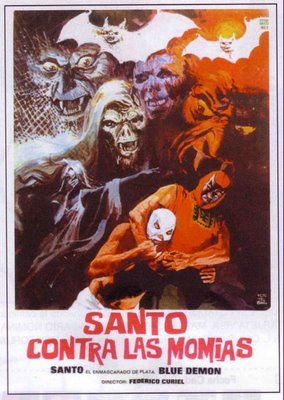 Mexico’s most popular lucha libre wrestler of all time, El Santo, made dozens of films throughout his career, most of them having titles beginning “El Santo contra … “ and then insert the name of the villain of that particular film, such as Zombies, Female Vampires, Dr. Death, etc.

One of the better known titles is “El Santo contra Las Momias de Guanajuato”, perhaps this is because there actually are mummies in Guanajuato.  Although, when we toured the mummy museum on a recent trip to Guanajuato, they didn’t seem to be in fighting shape.  Probably because of that mind hex El Santo put on them to send them back to their coffins at the end of the movie.

The discovery of mummies in Guanajuato really came about by accident. One of the town’s more popular cemeteries was filling up, so they decided to start making families pony up in order to keep their loved one’s eternal resting places eternal. The bodies of those families who couldn’t pay or were no longer around were to be dug back up and either re-buried elsewhere or cremated.

It was then that the town discovered that the soil’s mineral content was causing the bodies to become mummified, sometimes in as little as 5-7 years after burial. Sensing an opportunity for a tourist dollar, I suppose, some of the more interesting (and sad) retrievals were put on display at what is now the Mummy Museum in Guanajuato.